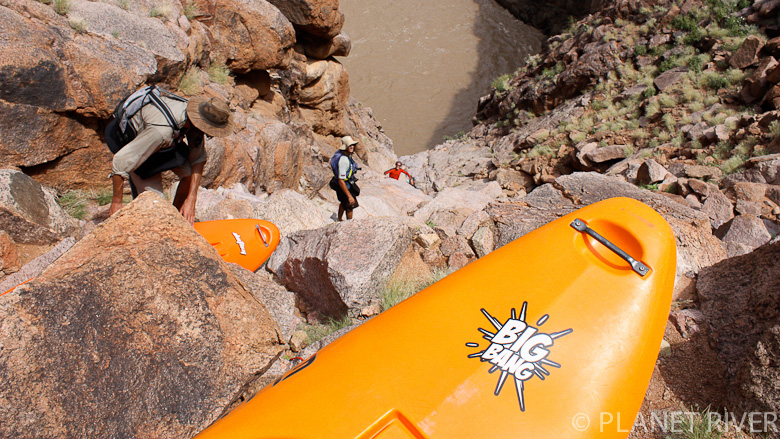 Monday 28 February : Depart Cape Town at 1pm in a 1000cc motor car, fortunately only 2 of us in the car. The car is the kind of size where you have to take off your shoes to drive, sounds like another activity you have to take your shoes off for. Kayaking. We drive over the 1500 cumec strong Orange River near Colesburg at about 11pm, it is dark and we can see in our minds eye what the river should look like. We share the drive until about 1a.m. and take a side road off the N1 and bush camp for the evening, a cool breeze blows away the heat of the African day as we look up at the Southern skies and wait for shooting stars boosting through the Milky Way.

Tuesday 1 March : A milky gas station coffee is our wake up in Bloemfontein before heading to the foothills of Lesotho. The entire landlocked kingdom has an elevation above 1000 metres. Enter lesotho at 10am. Passport stamped, drive across the murky Caledon River. We negotiated our way for high quality digital maps of the country at a highly bribed price. To think we knocked a third of what he wanted, and he was still going to score. However we now have quality maps to use. A quick walk around the capital, Maseru to get some photographs and kill some time whilst the files are burned. Depart Lesotho by 1pm and we are on our way to Golden Gate National Park.

Wednesday 2 March : Take a great drive in the peaceful, cool and breezy heights through 2 game drive loops in the morning. A rainy summer has provided well for the Grassland Savannah with a rich harvest for the Mountain Zebra, Wildebeest and Blesbok we spotted. We moved from a zone of absolute tranquility following the Wilge river from the border with Lesotho and within 5 hours we were in industrial Johannesburg, one of the busiest metropolitans in Africa. A meeting with Kim Scott at Navistar in Benoni. Good timing with the traffic and we arrive at our Granny Wilson´s house at sundown. 90+ Grandpa Ernie tackles the chicken as it hits the table minus his dentures which gets Granny in hysterics and combined with a shared bottle of wine we have a great evening with laughter our unseen companion .

Thursday 3 March : Up early with a teary goodbye from Granny Wilson and first up is a lesson in getting lost in a big city, but, we still make it on time for a meeting up with Jacques at Sandown Motors. We had a tour of the new Vito with Blue Efficiency technology to help reduce emissions. A successful lunch meeting with Stefan Botha of Staffataclick to agree on a deal and we bust out of the big smoke and head towards Parys on the Vaal River. Celliers and Jan @ FLUID kayaks were there to greet and spend time discussing what they are up to with new designs and kayak production and our plans for the ORANGE RIVER guidebook. New WRSI helmets with funky colours and FLUID branding were fitted, both of us taking the small size(nothing to do with our brain capacities). The DETOX and the BIG BANG were loaded and floated above the miniature ´road-rocket-ship´ on inflatable racks. Into the night we drove and car camped just off the N14 outside Kuruman at 2 in the morning.

Friday 4th March : Up early with dewy sleeping bags and into Kuruman for a shower in the church garden sprinklers. Part 5 of the week, and at the 2500 km mark we were 12 hours ahead of schedule. We decided to slow down and took our time getting to Augrabies town and coasted in at sunset. Catch up beers with Mr. & Mrs. Agent Orange and we all planned our boating mission for the week-end. We wanted an easier day for Saturday as Ine and I had not paddled since September, we agreed on checking out the Miggie Falls channels near Kakamas. Sunday was going to be big, a descent on an unknown run. An ancient gorge of the Orange which we are sure nobody has descended.

Saturday 5th March : Boats loaded on the bakkie and Jerry Can joining us, the 5 of us headed upriver to the 700m contour line of the Orange River, also known as Miggie Falls. Stopping on the hill on final approach the scale of the falls is realised. At 2km wide, the river had the flood flow of a silt laden African river. A quick discussion with local, Agent Orange and we ferry and portage to get us to one of the main side channels. A scout and um and aah, and i decided to give my new Big Bang its first tour on big volume action. An expected typewriter move at the kicker hole midway down pushed me left out the main flow, spinning around in the eddy line forcing me to ride the remainder of the roller-coasters backwards, at least i was still upright. The 310 litre/82 gallon volume of the Big Bang floated me high and dry through the entire run. 2 of us headed out to run the shuttle down to Neusberg Weir while Mrs.Agent Orange, Ine and Jerry Can had a sunset float down to Neusberg Weir. I was attacked and stung by hornets while filming the sunset on the weir wall, which was Africa leaving a little mark.

Sunday 6th March : Up at sunrise and the 4 of us lined up in Fluids fleet of a Detox, Spice, Solo and Big Bang at the put in at the muddy banks of a river that was running at 5 and half thousand cumecs 3 weeks ago. An early morning paddle through washed out features of the main river was our warm up. We then entered a narrow winding channel through the acacia thickets following a resident Fish Eagle. The expected horizon line came into view. A 30 min portage around a multiple syphon packed drop of about 70 metres in combined height brought us above a waterfall we had sat at the base of 14 months ago. This time water was flowing over Big Bang Falls (temporary name). The volume was bigger than expected with a technical entrance down the 25/30m slide before plunging another 25+ metres to the pool. It was humbling to take the 2 hour descent around the falls in the 42 degree desert heat. This waterfall has someones name on it, and would be one of the stoutest attempts ever on the Orange River. Good luck. We then were treated to about 4 km of class 3 pool/drop boogie water, before rejoining the main river. We were all now pretty beat from the heat, portage and mind numbing visuals we had just experienced, but the mood was buoyant and talkative. We had planned, executed and succeeded in descending this channel.

Monday 7th March : With just a 2 hour stop and sleep en-route we had driven through the stormy Karoo night to cover the final 850km back to Cape Town. To describe the drive as `trippy´, would be an understatement. Ine and i were still buzzing from the previous days adrenaline HIGH. 4000km´s later we offloaded gear at family and friends. Ine and i then grabbed surfboards and washed off a weeks worth of living in a Blik met Wiele (Can with Wheels), in the cleansing ocean, stretching our bodies on the waves of the Atlantic.

PS. Unlike the little hired car where i had to take my shoes off so my big toe could operate the accelerator pedal, i now have a kayak where i can wear my size 47 shoes whilst boating……It´s called the Big Bang.