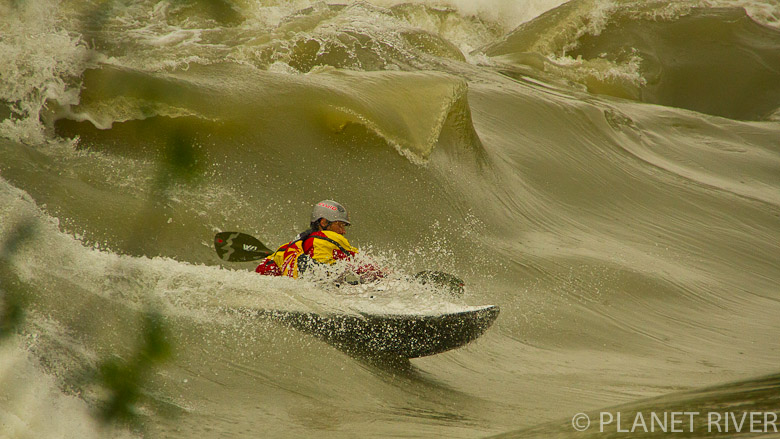 Sweden, Denmark, Germany and Switzerland were only lands of passing through on my 7500km journey to and from France & Italy. 1st up was a day session in Lyon at the Hawaii-sur-Rhone wave with David and Mathieu. A Dope and Element were the play machines and the river provided a fine feature. River right provided a bouncy and thumpy diagonal leading into the big wide smooth middle section where the Element was literally in it´s element. The river left section of the wave hosts a small green shoulder to tow across into the steeper shoulder of the foaming, muncher section where the Dope felt more at home. David and Mathieu traded turns on the film camera and play boats whilst i shot stills and front surfed my Big Bang a couple of times.

Spent a couple of nights about 45 minutes east of Lyon at San Bresse Slalom course on the Rhone. Was a handy spot to stay at. I had not paddled for a few months, so was great to get the feel of boat handling again and catch some eddies. Although it was the first time in 20+ years of boating, that i had to pay to go for a paddle. Reasonable rates, but still could not quite grasp the fact.

Mathieu was headed to the Alps to catch up with his crew. Invited to join, i re-circled 423 roundabouts(Yeah, i know …. i will get a GPS thingy for next trip), picked up 3 cases of wine and champagne in Longeray, Chambery for my neighbour in Norway, toured a frosty mountain pass from Grenoble and i found myself in Briancon and the Durance valley at 2am. For the next week we paddled sections on the swollen waters of the Guil, Guisane and Durance. The 400 meter long tight-walled gorge below the 13th century Chateau Queyras on the Guil was definitely the highlight for me. Squaring up to the never-ending crashing diagonals and the freight train speed of the run is what gets me stoked. It was impossible not to have ´Game of Thrones` visuals of leather and iron-clad, screaming & writhing soldiers drenched with boiling oil and archers arrows embedded in their brains, being smashed into the frothing waters of the Guil by tossed rocks from the laughing lords and giddy soldiers in the safety of the well positioned Chateau above. During this week i camped at Stade de Vieu slalom campsite on the Durance. A great spot to get a few daily runs to hone the skills between river runs and burn off the copious varieties & amounts of cheese i was consuming.

Before leaving France, I managed to catch Day 1 of the inaugural Outdoor Mix Festival. I chose to rather shoot photos of the Giant Slalom on a sunny day on the steep shallow waters of the Malafosse section of the Fontenil. This event is going to be big next year. Moving the location daily provides an awesome platform to test the all round whitewater boater with the added attraction of a star-studded competitors list.

ITALY next via the Montegenvere pass and straight to Torino to pick Ine up from the airport. Headed up the Valle de Lanzo for 2 quiet days of fine dining, champagne, 4 star hotel, touristy drive to the end of the road to the Italy/France border ….. and that´s all you need to know!

Time to catch up with the FLUID EURO TEAM in Torre Pellice. Having lived in a tent the last 16 days, it was super to stay at Cascina del Forte hosted by Carla. Treat yourself if you are ever in the area. The weather forecast was somewhat bleak with what we wanted to achieve in terms of filming and photography. Nothing like 7 euro pizzas and cheap beer to lift the mood and get to know folks who have up until now, just been ccéd names on e-mail conversations. First up was a warm-up run on the roadside Germanesca River with Josh, Falke and David. A steepish technical Class 4  run turned into only David completing, after countless portages and scouting, near misses, and an untimely swim by me. Hats off to Josh for committing to the non-stop beating he was getting on the steep, low volume boulder garden. Sense of humours were regathered at a post mission pizza parlour washed down with biere grandes.

Sunday morning was like a big birthday party. Our new toys for the summer had arrived. Express delivered from the Tootega factory in the U.K. Bubble wrapped bundles of shiny colourful plastic burst forth from the depths of the delivery van. Several hours were spent comparing each others choices from Fluids´ varied range.

SUN, time to go boating again and get the needed footage. The rest of the team had also arrived. Mathieu, Kees and Paul completed the group.  Conveniently there is a great double drop 200m down the hill from the Villa we were staying at. Run after run in the sun was taken at a multitude of frames per second at every possible angle. Paul and Ine shooting stills. Mathieu and David rotated and captured the moving imagery. Josh, Kees, Mathieu, David and myself fired up many a run. With that many cameras, who does not want to be in the spotlight.

Taking our cameras and hoping for a few shots later in the afternoon Paul, Ine, Josh and myself went for a paddle. Somehow, we just ended up having a pleasant fun paddle, with a few shots for good times with good people.

Time to search for some variety and we convoyed out of town headed east of Torino with the Chuisella and Valsesia valleys as the chosen locations. I missed the Chiusella afternoon session after dropping Ine off at the airport and then getting hopelessly lost in Torino in my rush to catch up with the crew. Warning : if you drive the tolled Autostrada, do not miss your planned turnoff. You will drive another 20/30 clicks or more to the next offramp and then pay to go all the way back. (Yeah, i know …. i will get a GPS thingy for next trip). The rest of the team managed to gather some valuable imagery. A late night convoy and we found a campsite and ate another 8 euro pizza each.

We woke to the heavens pounding on our respective tents, vans and caravans. Sleepy heads slowly arrived in the communal patio and after a few coffee´s and croissants and laptops being scoured for weather reports(was not looking good). The call was made to cancel the rest of the shoot. Bummer. Not really. The shoot was cancelled, but the idea of boating was not. Most headed back to their Euroland hometowns. Mathieu, Kees and myself decided to hit up Valsesia for a park and huck at Gronda and catch up for an evening of strong beer and good times with some folks we all knew in the valley. I also needed to pick up 7 AVALANCHA pfd´s that had arrived from Argentina.

´El Capofamiglia`  a.k.a Celliers was arriving and needed a pick up from Torino. The taxi drivers at Torino airport were starting to recognise me now, on my third visit in a week and visions of a turf war were imminent. A long wait for lost luggage and a quick departure had us undercover and lost again on the way to the hotel. (Yeah, i know …. i will get a GPS thingy for next trip). Hotel living for 2 days and some good chats with Celliers helped me get a bigger picture of Fluid Kayaks and his motivations and his dreams for Fluids future whilst the heavens poured down glorious rain to fill the rivers.

Saturday morning and it was back to the `consiglieres´  villa in uptown Torre Pellice. A chilled out day of talk, pizza, and video and photo editing with David, Mathieu & Celliers whilst the rain did its thing again. SUN=Sunday, and we spent the day filming much needed footage of the inside of a kayak for an outfitting demo video. Banter, shit-talk and humour filled the gaps of a day we would rather have spent on the water. But hey… when ´el capofamiglia` says we shoot the inside of a boat, we shoot the inside of a boat.

Homemade joke. ( getting this italian thing )     Q. What do you call a male pizza. A. Pizzo

I was now needing to get back on the road to Norway, summer work was kicking in back home and the rains were imminent again here, so filming and photoing was out the picture. Loaded the car with 4 new toys, was given `capo bastone` rights, took a last few pics of the boss, his advisor and underboss as they headed down the hill for a Sunday evening boating session. 11pm and i found myself back in Valsesia, with half of the population of British and Irish boaters gearing up for Gene17´s Valsesia festival.

Was going to leave early the next morning, but was convinced that a run on the Mastallone would ensure that i left Italy with at least a 3rd day of sunny boating. I joined Tom Parker and his crew after getting lost again (Yeah, i know …. i will get a GPS thingy for next trip). A super fun, SUNNY day on a classic run without the lights, camera, action getting in the way of a good time.

I had wanted to drive back through Switzerland as everybody said it is a must see. All i saw were my windscreen wipers, truck tail-lights and rain and wet road. Next time, maybe… It bucketed with rain every single minute of my 36 hours back to the Norwegian border. A good long sleep in Frederikstad at my father-in-law house, Eilif. The final 450 km home took 9 hours in the rain. Several landslides blocked the detoured route home, including 1 that was 2 km from my house forcing me to do a final 50km detour.

The beautiful thing about all this rain, was that the first day back home i was able to give my Element its 1st taste of big wave surfing on a flooding Sjoa River….. HAPPY DAYS .

Mathieu Coldebella - good safe times on the river and making sure i was never too lost and forgotten.

Falke for keeping the smiles and entertaining banter at peak levels

Josh - showing us how it can actually be done.